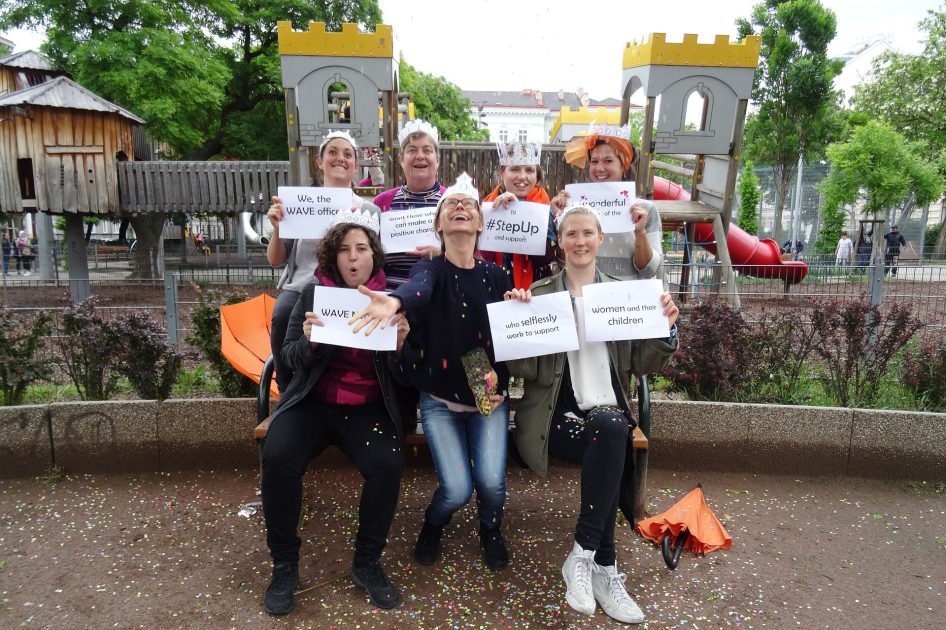 19-21 October 2016, Berlin, Germany Step Up! Europe – Unite to end violence against women and their children

25 October 2016 This year’s WAVE conference took place in Berlin/Germany and brought together a wide range of practitioners, members of the academia, government representatives and EU and UN experts to discuss pressing issues related to violence against women and children across Europe, including effective measures that can prevent this and the situation of refugee women and racism in Europe. The event was attended by approximately 400 participants, coming from several countries and continents who sought to use this opportunity to engage in ongoing feminist debates, disseminate best practices in the field and exchange views and ideas on the issue of violence against women and provision of specialist support services in Europe. The conference created a platform for discussion and interaction between experts and practitioners from 52 countries. This gave them an opportunity to reinforce their feminist principles, strengthen their commitments, find inspiration and new approaches in the field of preventing violence against women, and last but not least, engage with new ideas and give and receive mutual support. Another focus of the Conference was also to promote the WAVE Step Up! Campaign which WAVE together with its members is carrying out throughout 2016- 2017 www.wave-stepup.org . Speakers at the conference touched upon important recent events from Germany, such as the passage of the new law on sexual violence. Indeed, as Ms. Elke Ferner, Parliamentary State Secretary to the Federal Minister for Family Affairs, Senior Citizens, Women and Youth from Germany had stressed, ‘no means no’, because the will of the woman and not coercion should be the requirement for the prosecution of sexual assault. Ms. Joanna Goodey, from the European Union Agency for Fundamental Rights (FRA), drew attention to the vulnerabilities faced by female asylum seekers in Europe, stressing that refugee protection is a basic fundamental right, yet reception facilities in most European countries surveyed by FRA do not meet the required standards. It is extremely important for undocumented migrant women to have access to specialist support services, such as shelters, counselling and medical services, unhindered by complicated bureaucratic procedures. Professor Sylvia Walby spoke about ongoing challenges when it comes to data collection in the field of gender-based violence, as there is a lack of comparability in definitions and units of measurement across agencies and surveys. Hence, in any data collection exercise on violence both women and men ought to be included, to highlight that violence against women continues to increase while violence against men is decreasing. This year’s key note address was delivered by Ms. Dubravka Šimonović, UN Special Rapporteur on violence against women, its causes and consequences. She argued that it is important to step up efforts at the global level to end violence against women and highlighted the need to combat femicides through monitoring and data collection, which can guide policy makers and act as a catalyst for change. She urged states to establish femicide watches and argued that a flexible model should be applied when creating such mechanisms. WAVE President Ms. Rosa Logar and Ms. Heidi Meinzolt from Women’s International League for Peace and Freedom (WILPF) emphasized that governments should allocate more funds to social services, especially specialist support services for women and children victims of violence, instead of spending exorbitant amounts of money on military arsenals. Military spending continues to receive enormous amounts of money from governments, while many do not event know how much they spend on preventing and combatting violence against women. It is imperative for this practice to change. On the second day of the conference participants were invited to choose from an extensive list of workshops addressing various topics related to gender-based violence, such as survivors’ rights, prevention of femicide, accession of the European Union to the Istanbul Convention, access of undocumented migrant women victims of violence to justice and services, forced marriage, and preventing sexual violence against women and girls. The Conference was organised together with the WAVE Members in Germany (ZIF, http://www.autonome-frauenhaeuser-zif.de/ KoK, https://www.kok-gegenmenschenhandel.de/startseite/, BIG http://www.big-berlin.info/medien/berlinerinterventionsprojekt-gegen-haeusliche-gewalt, Frauenhauskoordinierung http://www.frauenhauskoordinierung.de/ and bff https://www.frauen-gegen-gewalt.de/ ) Contacts: Andrada Filip: Andrada.filip@wave-network.org Maria Rösslhumer: maria.roesslhumer@wave-network.org Further Information about WAVE: www.wave-network.org Further information about WAVE Step Up Campaign: www.wave-stepup.org #StepUpWAVE and #WAVEConference2016